Mike Duggan, the Democratic Mayor of Detroit, Michigan, delivered cautionary words this week to his fellow municipal leaders around the country during the U.S. Conference of Mayors winter meeting in Washington, D.C.: He urged them to spend the money cities received as part of the American Rescue Plan Act (ARPA), the big COVID-19 economic relief package passed in early 2021, before a potential clawback.

The ARPA money was allocated for a wide range of municipal and local projects and relief efforts: specifically $10 billion was earmarked for capital improvements projects, including broadband expansion to unserved and underserved areas.

A year ago this month, the U.S. Treasury Department relaxed the rules governing the use of the ARPA funds to allow for them to fund even more types of broadband projects, but tightened them in one way: requiring participants to participate in the Federal Communications Program’s Affordable Connectivity Program, which provides $30-per-month discounts on broadband service to low-income households ($75 on tribal lands).

However, merely participating in the ACP does not guarantee individuals will be able to access the internet services they seek: Comcast was recently accused of erroneously turning away ACP qualifying customers from some of its low-income offerings in Massachusetts.

The ARPA money was supposed to be good to spend through the end of 2026, but Duggan was skeptical it would actually still be available up until that time.

Duggan specifically called out federal Republican lawmakers in the U.S. House of Representatives, who retook the majority in that body following the 2022 midterm elections, and are now seeking major cuts to federal spending — which could put the unused ARPA funds back into the federal coffer.

The city of Detroit has been exploring the use of Ready.net’s Community Broadband Kit to land grant funding as it explores the idea of creating its own internet service provision.

Broadband.money is an interactive geospatial platform that provides data, mapping, and self-service planning tools to broadband grant applicants and others who need to plan network builds.

The platform includes more than 200 public and proprietary data sources. They include: American Community Survey data, the national address database, and more.

The platform provides essential insights on broadband serviceable locations, existing network performance, anchor institutions and secondary addresses in all 50 states, the District of Columbia, and the the US territories.

Users can customize their views, filter by attributes, identify key stakeholders and create areas of interest for detailed insights and business intelligence analyses.

They can use the platform to calculate rough estimates of the economics and grant needs of their target areas before conducting detailed engineering or financial modeling.

For more information on how your city can quickly and efficiently create a feasibility study and apply for a grant, contact: sales@ready.net.

Residents of Elma in Washington State struggle to access the internet. Our broadband audit quantifies the town's lack of connectivity. 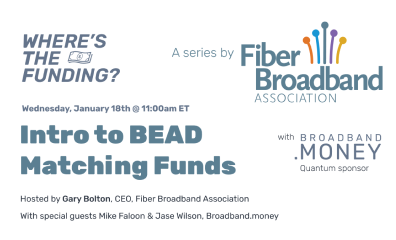 If you're applying for an IIJA BEAD grant, you should attend our webinar new "Where’s The Funding?" series, hosted by Gary Bolton, President and CEO of the Fiber Broadband Association.